As a reporter, I’m often faced with the task of making quick decisions. Covering this year’s March for Life was probably one of the biggest stories that put my decision-making to the test.

This year’s march was scheduled on a Friday, January 22. In preparation, photographer Lisa Johnston and I arrived in Washington, D.C., a day ahead of the 2,200 teens from St. Louis who were part of the Generation Life pilgrimage. We had some leads on a few other stories with local and national ties, so we knew we’d be at work right away. After meeting up at the Washington Monument with a group of eighth-graders traveling from Immaculate Conception in Union, Mo., we made a stop to file our content.

Just then, our colleague Elizabeth Westhoff called. The conversation went a little something like this:

“Generation Life has just canceled its trip because of the approaching blizzard. You need to book a flight and come home now.”

This was my reaction:

The moment you find out the 3,000 youths going to #March4Life can’t come cause of #blizzard @JenniferBrinker pic.twitter.com/sox1LCbs5Q

Coming into this assignment, we knew there was a chance this blizzard was going to collide with the march, potentially dumping historic amounts of snowfall across the D.C. and surrounding areas. We packed extra clothes and made a last-minute stop on the way to the airport to pick up some snow boots. (Shout out to my editor Teak Phillips for the REI recommendation!)

Even though we were obviously disappointed Generation Life was canceled, we understood the safety of the teens came first. What a truly pro-life decision the Catholic Youth Apostolate made, even though it was a difficult one to make.

But as they say, the show must go on. 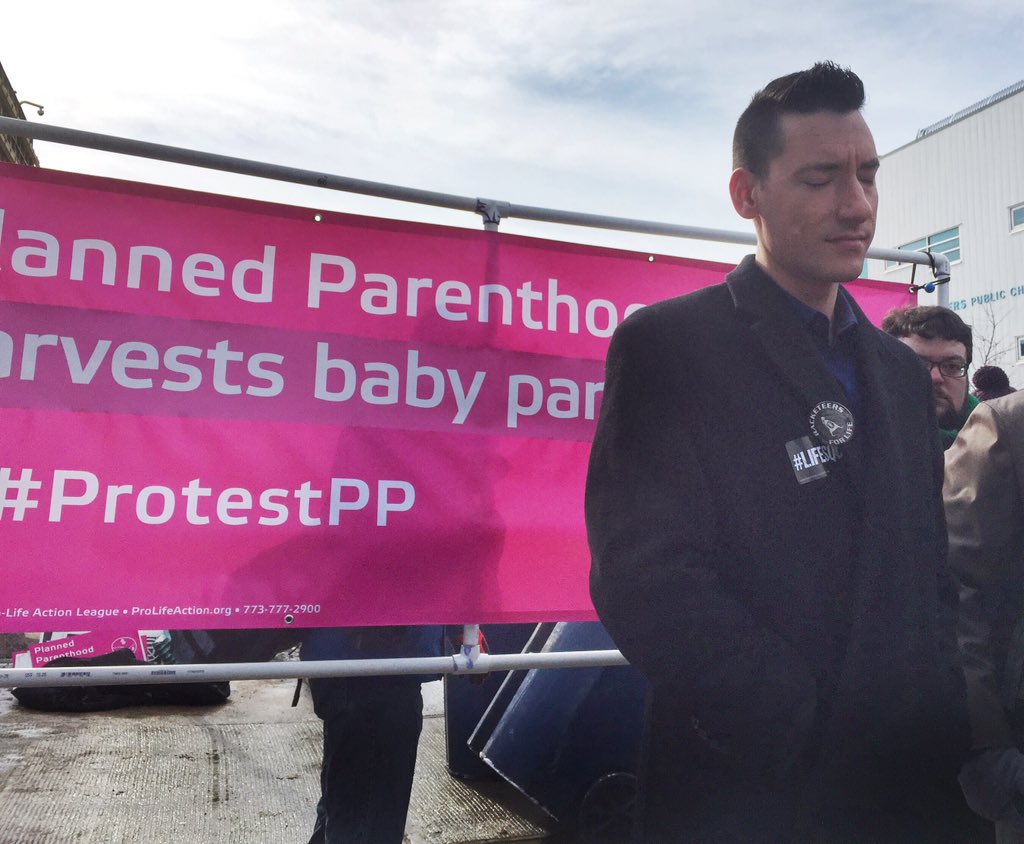 Washington, D.C., Jan. 21, 2016 – David Daleiden at a prayer protest outside a Planned Parenthood clinic under construction – photo by Jennifer Brinker via twitter

After a little bit of weighing the pros and cons, we decided to stick it out. We had prepared ourselves as best we could, and all indications pointed to the March still happening as planned. There were several other St. Louis-area bus caravans already on their way to the nation’s capital, so we had some stories lined up.

And our persistence paid off: We attended a rally in front of a Planned Parenthood clinic under construction; David Daleiden of the Center for Medical Progress — the organization behind the undercover videos of Planned Parenthood — was the keynote speaker (check out the story here). Later that evening, we met up with a group from St. Joseph in Farmington, who took to the steps of the Supreme Court to pray the Rosary on the eve of the March and the anniversary of the Roe v. Wade decision (read about that experience here).

Standing in the frigid air that night on the Supreme Court steps, I knew we made the right decision earlier that day to come home. You see, in between assignments, I called home one more time to check in. This time, it was apparent that the historic snowstorm was going to leave us not only stuck in D.C., but also likely with nothing to do. Metro transportation was going to be shut down once the snow hit, and some of the groups we had planned to cover also were making plans to leave earlier than expected.

Going back to our time on the steps of the Supreme Court with the folks from St. Joseph in Farmington — it was more than just symbolic of the quiet prior to the snowstorm. This also was the moment of stillness before the anniversary of a day that forever broke our nation. As we prayed, I felt a great sadness reflecting how our society has embraced a culture of death. Is there any hope for our country anymore?

Beyond the obvious safety reasons, I believe we pulled out of D.C. early for another purpose. Lisa and I made it back home in time to cover the rescheduled Generation Life program at the Cathedral Basilica of Saint Louis. About 1,000 teens made their way from the Cathedral Basilica to the Planned Parenthood clinic a few blocks away to pray the Rosary for an end to abortion. (story here.) Seeing them spilled out onto the street next to the clinic was the hope I needed to see in the face of a culture that has killed more than 58 million innocent lives since Roe. Their witness that afternoon was inspiring to me, and my hope is that they keep that fire for life alive 365.

GenLifeSTL 365 is an extension of the Generation Life movement and aimed at a youthful audience. GenLifeSTL 365 serves as a hub for any individual who wishes to celebrate, protect and care for the dignity of all human life, from conception to natural death. Click the logo for more information.